DryZone, LLC. was recently honored at the Annual Team Basement Systems Convention, a gathering with dealers located across the United States, Canada and the UK.

The annual convention is held each year at the Basement Systems headquarters in Seymour, CT and the Connecticut Convention Center in Hartford, CT. The three day event brings together dealers in the international network for training, seminars, networking, vendor and team building events, and celebration. 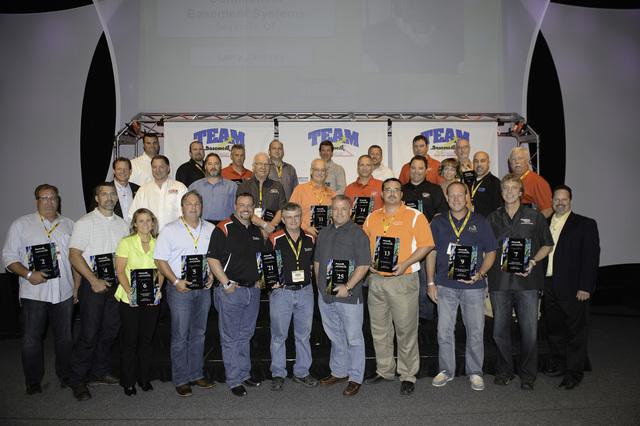 · 21st Place among the Top 50 Basement Systems Dealers by Purchases

· 11th Place among the Top 25 CleanSpace Dealers by Square Footage

The high-powered event featured best-selling author and motivational speaker Aron Ralston. His book, Between A Rock And A Hard Place, was turned into the critically acclaimed movie 127 Hours starring James Franco. Ralston moved the crowd with his inspirational story of survival and posed for pictures afterwards with attendees.

Google also had a presence at this spectacular event. Two Google representatives delivered a behind the scenes peek at how to best utilize the search engines tools for successful business results.

Close to eleven hundred people attended the annual Basement Systems Convention this year, which is the highest attendance to date. The flagship event is held each August in Connecticut.

The company is also proud to be a part of Basement Systems and Foundation Supportworks Networks, the world's largest and most reputable foundation repair and waterproofing contractor networks with over 300 dealers across the U.S., Canada and U.K.

About the author
Brad has been with DryZone since early 2011. Currently he manages both of DryZone's websites in order to spread the DryZone message. Brad grew up in a military family so he moved around the country as a child. He settled in Delaware in 2006 and currently lives in Seaford.